Menu
Building the Metaverse: How Oort is Revolutionizing Decentralized Computing and Powering the Next Frontier of the Internet

The metaverse experience is gradually becoming a radical technological intervention poised to change our lives in the coming years.

As a shared digital experience that combines both virtual and augmented reality with the physical world. It is considered the next frontier in the advancement of the internet. Due to its ability to offer real-time interactions and a robust experience to users.

The blockchain is central to the development of the metaverse infrastructure as it ensures security. And the data reliability of transactions in the ever-growing digital universe.

Blockchain’s role as an immutable decentralized ledger furthermore provides a secured protective layer on transactions against cyber hacks that have dealt a blow to many centralized financial systems and remains a crucial concern for the smooth functioning of the metaverse.

Oort provides the infrastructure to power the new web3 and metaverse. The constantly evolving network of virtual worlds that allows people to build, explore and create a parallel universe that mimics physical reality.

Oort aims to make storage power and decentralized computing a global phenomenon, thus boosting accessibility to metaverse infrastructures for easy use and exchange.

In web3 development, there lies a critical abyss of highly costly, undependable, centralized computing and storage power in the digital ecosystem. The Compute coin is a catalyst to this abyss by providing a hassle-free way for developers to deploy dApps on a decentralized infrastructure to meet the growing demand for web3 native and metaverse applications.

It simply achieves this by searching for a local network which can sufficiently meet the computing power needs of a user and allocate these servers to them.

Oort focuses on metaverse applications and works differently from other layer-1 blockchain projects by integrating and dynamically aggregating mining machines, and clouds. Such as DFINITY, Filecoin, and data centres to enable users to enjoy immersive experiences such as AR/VR gaming. 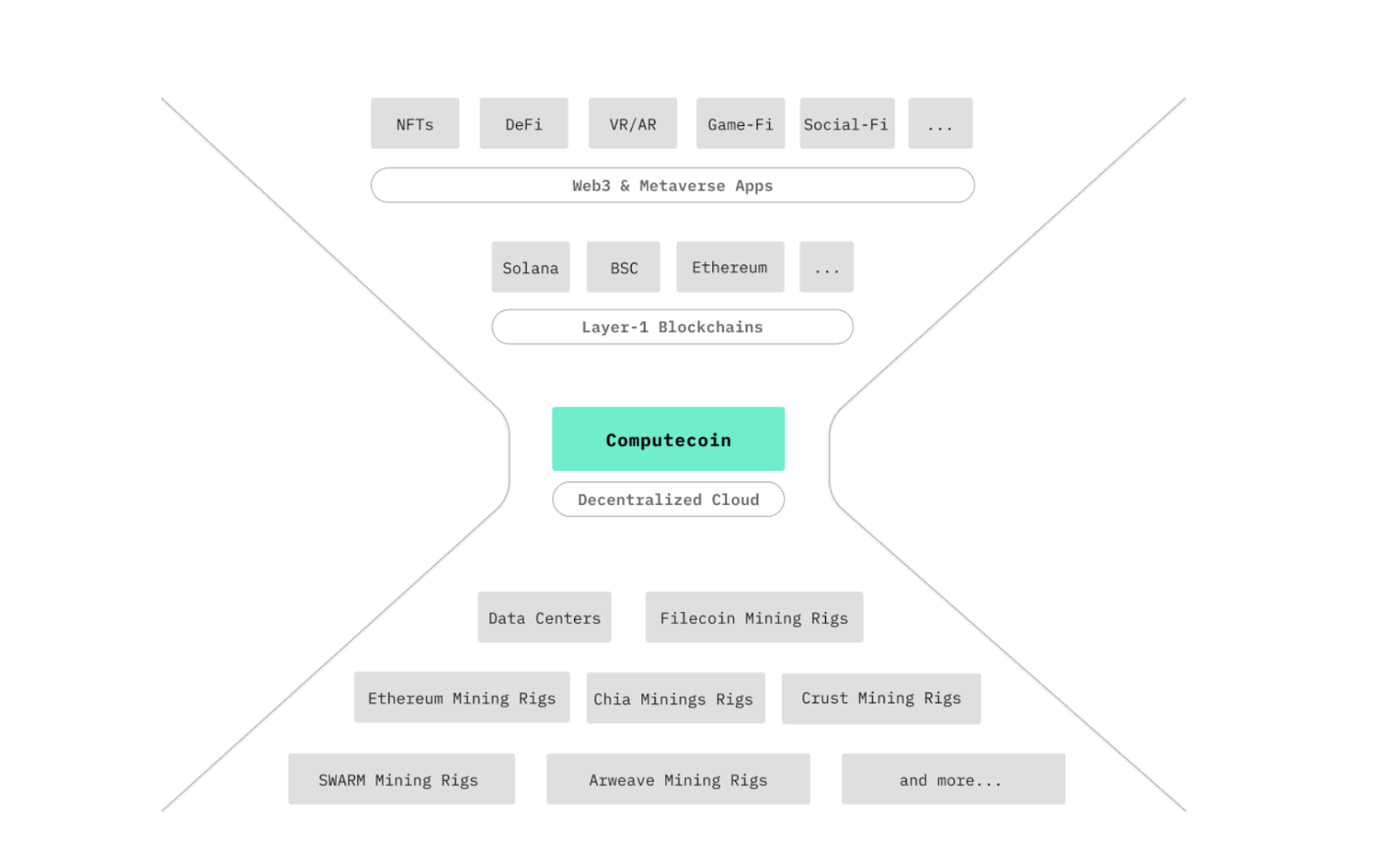 Today, projects in the metaverse ecosystem face several limitations that affect their smooth operation. Big platforms like Roblox and Fortnite are, for most parts, centralized and low-end as compared to the expansive capabilities the metaverse provides.

They can only offer a limited number of users access to the same virtual room at once and even with very limited customizability. We believe Compute coin has the necessary infrastructure to overcome these limitations and drive. The advancement of the metaverse into a new audacious era.

Computecoin’s bold mission to build the foundation for a democratized internet and their revolutionary approach to achieving this places them head and shoulders above many existing players in the industry. For instance, Computecoin’s proprietary layers, PEKKA and MCP, help it fulfil its mission. And democratize access to decentralized computing power seamlessly and affordably.

Computecoin launched “Dome-A”. Its testnet in Q4 of 2021 and recently stated that it drew over 200,000 CPUs, GPUs, and storage rigs’ worth of computing resources from around the world. This number shows the enormous amount of computing power domiciled on the Computecoin network and emphasizes. The needs a feasible solution for the metaverse and Web3 services.

For most computational purposes, Nividia 3080 graphics cards have been the most popular choice of many users as they can dispense up to 30.6 teraflops of computing power.

This makes them expensive at about $700 per card. Conversely, Computecoin’s first testnet results alone produced 3,060,000 teraflops of computing power surpassing. The specs for Fugaku, the most powerful petascale supercomputer in the world situated. In the Riken Center for Computational Science in Japan.

Building on this success, Computecoin can look to solidify its stance with the launch of Huygens, which is the second phase of their test net launch, planned for Q2 2022. This second phase will help fortify the network’s capabilities and expand its storage and computing power base.

Computecoin is already playing a pivotal role in web3 adoption and metaverse revolution and has taken a massive step in the right direction with their launch of the Ale wallet.

The primary goal of the wallet is to provide fast and easy access to the Computecoin ecosystem. Allowing users to securely store, send and receive CNN tokens and all the tokens issued on the Compute coin network.

Users and developers can therefore tap into the potentials of the CNN network and Ale wallet API. Where they can interact with the MCP layer of Computecoin and safely deploy smart contracts and build decentralized applications.

According to Dr Chong Li, founder and CEO of Compute coin, “The costs associated with IDC servers and centralized cloud services, to say nothing of supercomputers, are not practical for a business or project (one without billions of dollars to spare)

That needs to run complicated simulations, calculations and models, manage vast amounts of data, or deliver a seamless and immersive online gaming experience. Computecoin stands in the belief that there is a better solution, which the network provides.”

Compute coin offers such fantastic and cheap metaverse infrastructural. Alternatives while maintaining a profitable business model and with positive trends of even more adoption. Many developers and teams, including virtual avatar studios, and mixed-reality real estate management tools.

DAO are some notable projects among many others that are already achieving more on the Compute coin network. The important landmark achievement in Computecoin’s mission was marked by Uverse’s development of its virtual avatar studio in the Computecoin ecosystem.

At Aveslair we are thrilled to have partnered with Computecoin and led. It’s strategic fundraise of $6.2 million for the team. Partnerships, business development and product expansion into other blockchains in the coming months. We fully believe in its vision of providing reliable and affordable. Computing solutions for teams and projects toward the rapid adoption of the metaverse.